"The human genome is the physical substance of things hoped for, the scientific evidence of things unseen." - Georgia M. Dunston, Ph.D.

Whole Genome Science Foundation (WGSF), Inc., is a 501(c)3 tax-exempt, nonprofit corporation, formed in December 2014 to articulate a 3rd millennium vision for the Global Genome Generation (G3) Great Commission. WGSF, Inc., views the human genome as the quintessential model of a personalized, owner-operated corporate entity for manufacture and functioning of the human body. As the product of LIFE, the human body is made to manifest the glory of the Creator God, for such a time as this in the history of western science and human evolution. Emergence of the 3rd millennium G3 Great Commission is on time, on point, and on purpose in proclaiming the science, technology, engineering, and mathematics (STEM) of The Human Genome Kingdom Within, as authentic intelligence modeling of eternal LIFE for: a) transforming ‘big data to knowledge for wisdom’ in solving big problems of life in society today, and b) demonstrating the laws of LIFE encoded in the human genome for healthy living as whole persons: spirit, soul, and body. The G3 Great Commission tagline is ‘good science for better service to diverse publics’ in one global human genome family.

The mission of WGSF, Inc., is to accelerate and advance truth-based community education, engagement, and empowerment for living in the fullness of LIFE as whole persons in community, with purpose rooted in whole genome identity. With truth as the ultimate construct for good science, WGSF, Inc., supports competitive, cutting-edge research on the science of the human genome as a dynamic living information and communication system. With sequence variation as the fundamental characteristic of the genome, WGSF, Inc., supports technology driven, DNA sequence-based, state-of-the-art research on the genome as a living, hierarchical, dynamic information and communication system, encoding and expressing the laws of LIFE for the whole person: spirit, soul, and body, at all times and in all places. The G3 Great Commission theme is: “DIVERSITY: More than a social imperative, but a universal law of life”.

The goal of WGSF, Inc., is to support vision-led thinking, speaking, and being; employing STEM-based approaches, grounded in principles of the most advanced life sciences, to demonstrate the magnificent creative power encoded in genomic information dynamics expressed in human identity and population diversity. WGSF, Inc., asserts that the science of the human genome displays authentic intelligence (AI) of the Creator God, encoded in human identity and expressed in population diversity. Moreover, as humanity’s shared inheritance, the human genome is designed and engineered to communicate the living WORD of life, FROM: LIFE, eternal | THROUGH: Life, personalized in the genome | TO: life glorified in human beings | FOR: life on earth as it is in heaven. The G3 Great Commission endgame is to ‘go and tell the story’ of the human genome legacy of LIFE’s journey in time, through humankind, from the quantum to the cosmos.

The Whole Genome Science Foundation, Inc., was created as a private foundation to further research, teaching, training, service, and community education, engagement, and advocacy in the area of whole genome science. 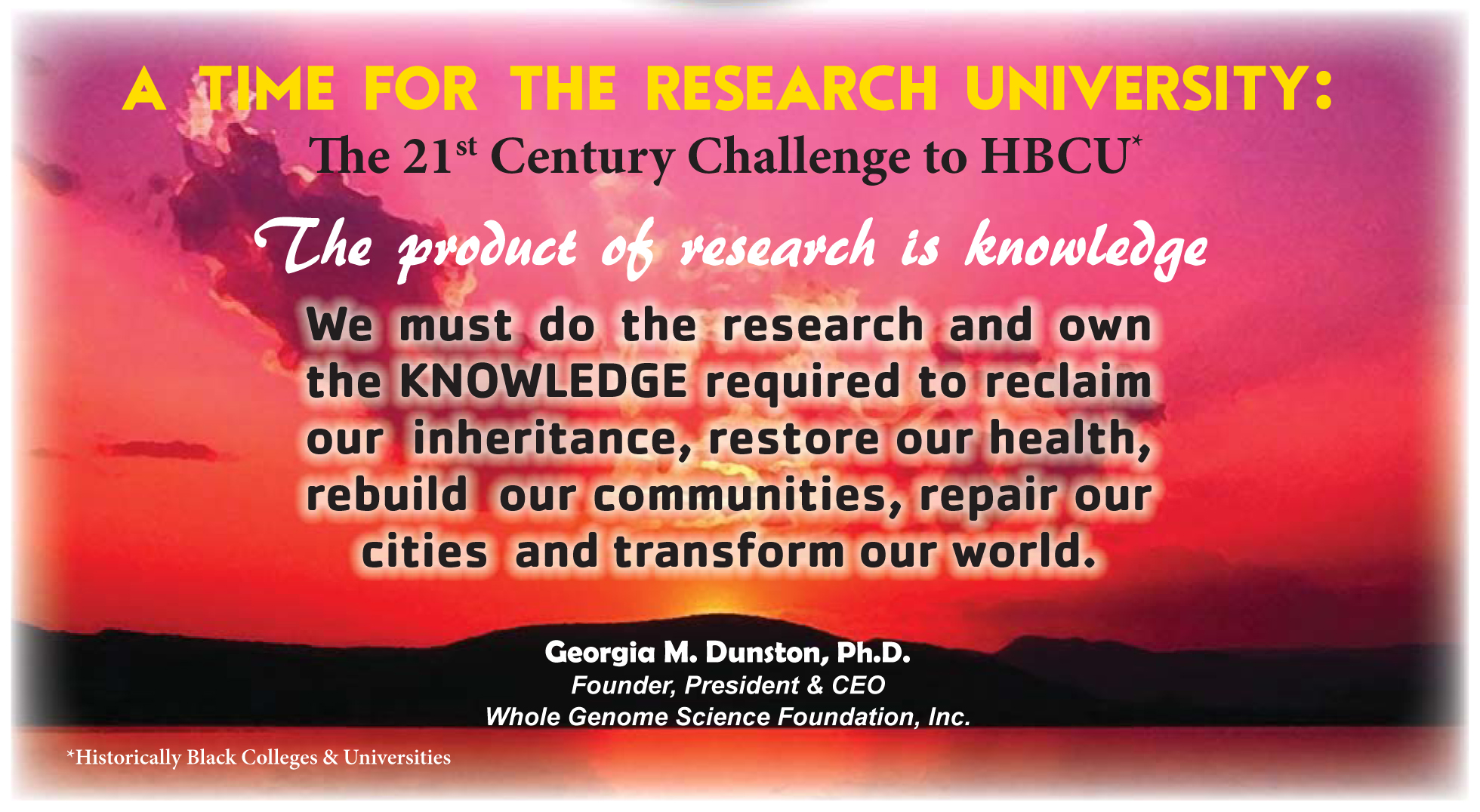 The Whole Genome Science Foundation, Inc., was formed in late 2014 as the first step in the dream and vision of founder, Dr. Georgia M. Dunston, a leading human geneticist and academic focused on the science of the human genome. Dr. Dunston worked for many years as Professor of Microbiology in the Howard University College of Medicine and head of the National Human Genome Center, a research component of the Howard University Health Sciences Complex in Washington, DC. She is now Professor Emerita with an active appointment in the Howard University Graduate School. Dr. Dunston realizes the importance and necessity of raising up a new, multicultural, global genome generation of scientists who share her vision of the ‘whole genome model of life’, as they will be charged with the vital work of ensuring that the whole genome story of human origins, migrations, adaptations, transformations, and liberations is explored and communicated to present and future generations. With solid evidence of Africa as the birthplace of humankind, Dr. Dunston has devoted her scientific career to investigating the science and teaching the knowledge of genome variation associated with health and disease in African Americans. Research on DNA sequence variation and big data science emerging from sequencing the human genome are foundational to Dr. Dunston’s life work of educating and engaging African Americans and global, diverse publics in the science and relevance of genome variation to population diversity, human identity, and self-discovery.

The National Human Genome Center (NHGC) at Howard University provided the scientific foundation for emergence of the 3rd Millennium Glorious Global Genome Generation (G3Gen).   Development of the Biophysics Research and Interdisciplinary Development Group (BRIDG) early in the NHGC 2nd Decade was foundational in broadening the research direction on DNA sequence variation from the biochemistry to the biophysics of the human genome.  Toward this end, novel aspects of the NHGC 2nd Decade research were developed through the collaboration of Dr. Georgia M. Dunston, Ph.D., human geneticist and founding director of the NHGC, with Dr. James Lindesay, Ph.D., theoretical physicist and cosmologist, who led the scientific agenda in exploring functional aspects of common variation and population genetics from first principles of thermodynamics and statistical physics.  With exquisite attention to the fine tuning of genomic information dynamics, Dr. Lindesay and BRIDG developed and established a new discipline of genodynamics as an analogue to the macrophysical thermodynamics of large systems.

Moreover, Dr. Philip Kurian, Ph.D., theoretical physicist and former NHGC BRIDG Postdoctoral Scholar, pursued the science of quantum biology by exploring quantum aspects of genome behavior.   In parallel with NHGC 2nd Decade research developments, Dr. Kurian independently led and established an international team of investigators engaged in exploring the frontiers of quantum biology.  Toward this end, Dr. Kurian has pioneered development of the Quantum Biology Laboratory (QBL) at Howard University.   The research direction of the QBL is aligned with new conceptual knowledge on whole genome identity and human consciousness that is grounded in principles of quantum physics, thus extending the focus of life science research from the reductionist to the holistic realm. The QBL is deeply committed to harnessing the innate, inherited, creative power nested in and inextricably hard-wired to the quantum electrodynamic field of LIFE on earth and in the universe.  Dr. Kurian is a WGSF-supported investigator partnering with Dr. Georgia Dunston in collaboration with the Howard University School of Divinity Science for Seminaries project, one of 10 initial pilot projects funded in 2014 by the American Association for the Advancement of Science (AAAS) Dialogue on Science, Ethics, and Religion (DoSER) program.  Dr. Kurian is also a key investigator in implementing the 2018 awarded AAAS DoSER Engaging Scientists Campus Event at Howard University, one of six research institutions across the nation competitively selected for participation in this project.

"The human genome story is an African story of human origins, migrations, adaptations, transformations, and liberations of the bodies, minds, and souls of humankind." 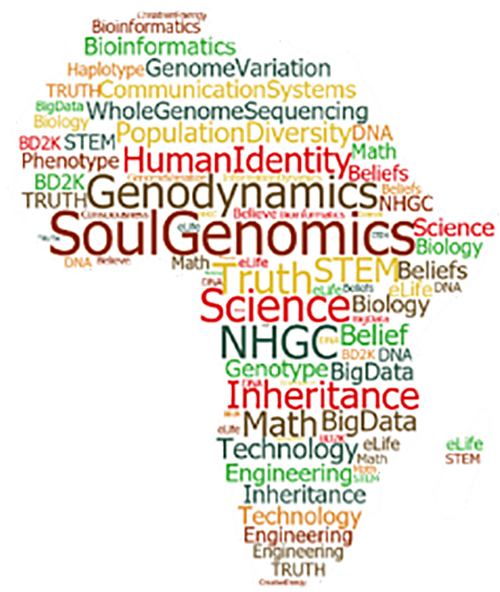 “The human genome is a dynamic information and communication system that encodes both systematic and creative aspects of being.”